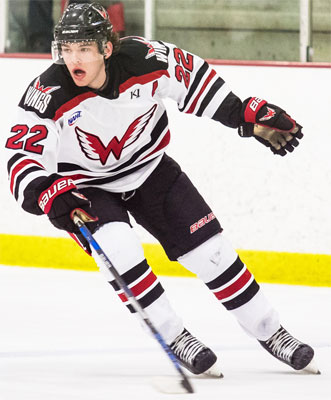 Jonathan Bendorf had two goals in a 4-2 win on Saturday night and now has seven goals in the 2019 Robertson Cup Playoffs.

Central Division Finals, Game 4: Aberdeen 4 @ Minot 2 (Aberdeen wins series 3-1) – The Aberdeen Wings jumped out to an early lead and fought off a comeback by the Minotauros to win Game 4 in Minot, 4-2 and capture the Central Division playoff title. With the win, the Wings become the second team to qualify for the 2019 Robertson Cup and will be making their second trip in the last three years to the event. After a scoreless 1st period, the Wings jumped out to a 2-0 lead with a pair of 2nd period goals from Jonathan Bendorf and Brad Belisle. Minot would storm back to tie the game thanks to a late 2nd period goal from David Raisanen and a goal early in the 3rd period from Vince Marino. However, the Wings snagged the lead back midway through the 3rd period with another goal from Bendorf, which was his second of the game and 7th of the playoffs. The Wings would secure the win late in the game thanks to an empty-net goal from Thomas Rocco. Wings goalie Matt Vernon made 25 saves in the win, while Nick Grabko made 22 saves in the loss. Boxscore