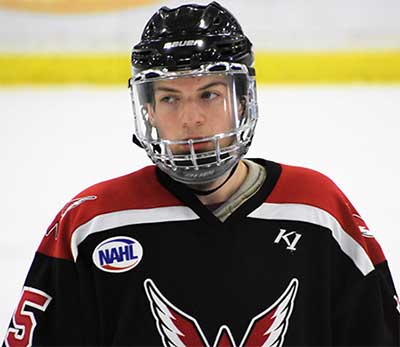 NAPHL alum Peter Morgan had a hat-trick to lead the Aberdeen Wings to a 7-3 win on Tuesday night over Brookings.

Brookings 3 @ Aberdeen 7 – Peter Morgan recorded his first NAHL hat-trick as the Aberdeen Wings rang in the New Year with their 10th straight win as they topped the visiting Brookings Blizzard, 7-3 on Tuesday night. The win pushed the Wings lead atop the Central Division to five points over the Austin Bruins.
Morgan, an NAPHL grad, got the scoring started early in the game with two goals in the 1st period to put the home side ahead 2-0.
The lead swelled to 4-0 in the 2nd period as the Wings scored two more goals from Riley Murphy and Shawn Kennedy.
Morgan completed his hat-trick early in the 3rd period and Connor Beatty also scored to make it a 6-0 game halfway through the final stanza. The Blizzard would score three of the final four goals of the game as Sam Antenucci, Brock Draeger, and Cart Krogman all broke through, but Wings forward Matt Kirwan would add a little history of his own with his first NAHL goal to make it a 7-3 final score.
Wings goalie Connor Close made 29 saves in the win, while Blizzard goalie Jack Caruso took the loss, making 36 saves on 43 shots.
Boxscore
The Wings return to the ice this Friday when they face division rival Bismarck at The Odde Ice Center.  The Wings will be looking to tie a franchise record with 11 straight wins.  Tickets for the game can be purchased now at any of the 4 C-Express locations in Aberdeen!  Doors will open at 5:30 and the puck will drop at 7:15!