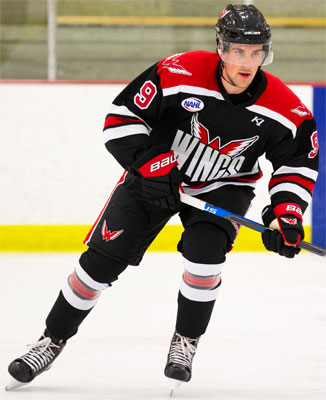 Bemidji State recruit Brad Belisle helped the Aberdeen Wings to a 3-1 win in Austin on Friday, which also clinched a spot in the 2019 Robertson Cup Playoffs for the Wings.

Aberdeen 3 @ Austin 1 – Brad Belisle lit the lamp twice and Matt Vernon stopped 21 of 22 shots as the Aberdeen Wings clinched a berth in the 2019 Robertson Cup Playoffs after defeating the Austin Bruins 3-1. Shawn Kennedy also found the back of the net for the Wings and John Sladic grabbed two assists. Kyle Herbster scored the only goal for Austin and Kyle McClellan turned aside 30 Aberdeen shots.
The two teams will meet again tonight at Riverside Arena.  Puck drop is scheduled for 7:05pm Central.  You can watch the game on HockeyTV.com, or at Buffalo Wings & Rings in Aberdeen!  Tune into 94.1 The Rock, HubCityRadio.com or The Rock App to listen to the game!