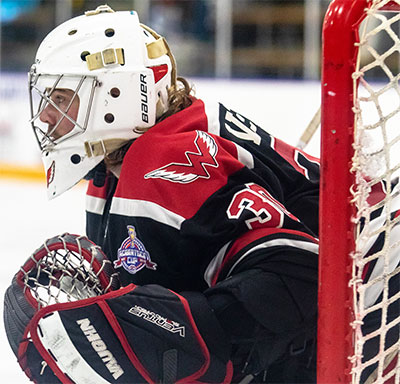 Aberdeen Wings goalie Matt Vernon stopped all 30 shots that came his way in a Game 3 win on Sunday.

Robertson Cup Semi-Final #2, Game 3: Aberdeen Wings 3 vs. Amarillo Bulls 0 (Aberdeen wins series, 2-1) – Aberdeen Wings goalie Matt Vernon stopped all 30 shots that came his way to lead his team to a 3-0 shutout win in Game 3 of the Robertson Cup Semi-Finals and clinch a spot in Tuesday’s National Championship Game. The Wings jumped out to a 1-0 lead less than three minutes into the game as Jonathan Bendorf shelved a shot over the shoulder of Bulls goalie Jason Grande for what would be the eventual game-winning goal. Late the 2nd period after both goalies were able to make several spectacular saves, the Wings pushed the lead to 2-0 thanks to a goal from Max Salpeter, who was left alone in the high slot and buried a shot past the blocker of Grande. Vernon and the Wings held the Bulls scoreless through the 3rd period and John Sladic added an empty-net goal to secure the 3-0 win and spot in the title game for the Wings. Grande made 20 saves in the Bulls loss. Boxscore
The Wings advance to the NAHL Robertson Cup Championship Game Tuesday at Fogerty Arena in Blaine, MN.  They will take on the Fairbank IceDogs at 7pm.