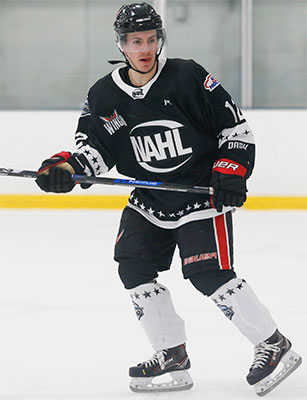 Central Division forward Connor Beatty of the Aberdeen Wings had two goals in a 6-4 win on Monday.

Day 1 of the NAHL Top Prospects Tournament in Attleboro, MA, featured plenty of offense as a total of 24 goals were scored in the three contests.

Day 1 also saw more than 160 NHL and NCAA scouts pack the building to get a look at some of the best uncommitted prospects the league has to offer in addition to some younger talent on the radar of NHL teams.

While the players will get to keep their game-worn jerseys from the event, a duplicate set of commemorative game jerseys was created by the NAHL’s official jersey supplier, K1 Sportswear, and those jerseys will be individually signed by each player at the event and then auctioned off on the DASH App.

Fans can take part in the auction by doing the following:

Central 6 vs. Selects Blue 4 – Connor Beatty (Aberdeen Wings) and Tyler Watkins (MN Wilderness) each scored two goals as the Central Division won a high-scoring affair over Selects Blue, 6-4. Bailey and Watkins provided the first two goals for Central midway through the 1st period. Selects Blue got a goal before the period was out from WBS Knights forward and Army recruit Lincoln Hatten to make it 2-1. In the 2nd period, Central seized control as Daniel Chladek (Bismarck Bobcats) scored to make it 3-1 and then late in the period Watkins added his second goal of the game to make it 4-1. Selects Blue tried to make things interesting in the 3rd period with three goals from Tiernan Shoudy (Austin Bruins), Dan Russell (Minot Mintauros), and Max Kouznetsov (Johnstown Tomahawks), but the Central put the game out of the reach with goals from Cole O’Connell (Minot Minotauros) and another from Beatty. Jake Sibell (Aberdeen Wings) stopped 7 of 8 shots and Landon Pavlisin (Kenai River Brown Bears) stopped 23 of 26 in the win. Henry Welsch (Aberdeen Wings) made 12 saves and Cooper Black (Maryland Black Bears) made 21 saves in the loss.

The auction for the commemorative and autographed Top Prospects game jerseys of all 108 players ends on Wednesday, February 19th at 2pm (central). Visit: web.dashapp.io/auctions

It was another day of high-scoring games, incredible plays, and a great display of talent at the 2020 NAHL Top Prospects Tournament in Attleboro, MA.

Close to 200 scouts packed the building again to witness some great action and the line-up to speak to the players following the event extended all the way down the corridors of the arena.

The Central and East Division teams both went 2-0 at the event. South Division and Amarillo Bulls forward Matt Allen led the event in scoring with five goals, while East Division goalie David Tomeo (Johnstown) did not allow a single goal during the action he saw.

If it was scoring that scouts wanted to see, that’s what they got. A total of 24 goals were scored in the three games each day during the event.

Now the commitment process will ramp up for the players who attened the event. Traditionally, half of the NAHL’s commitments to the NCAA each season occur following the NAHL Top Prospects Tournament.

While the players will get to keep their game-worn jerseys from the event, a duplicate set of commemorative game jerseys was created by the NAHL’s official jersey supplier, K1 Sportswear, and those jerseys will be individually signed by each player at the event and then auctioned off on the DASH App.

Fans can take part in the auction by doing the following:

East 3 vs. Selects Blue 1 – East Division goalies David Tomeo (Johnstown) and Patrick Pugliese (New Jersey) shined again as the East picked up a 3-1 win over the Selects Blue squad and finished the Top Prospects Tournament with a 2-0 record. The East got off to a strong start with two goals in the 1st period from Bennett Stockdale (Johnstown) and Cannon Green (Maine). The Selects Blue squad made it a one-goal game in the 2nd period with a goal from Reid Leibold (Maryland). However, the East secured the two-goal win thanks to a 3rd period goal from Noah Kane (Maine). Tomeo stopped all 12 shots that came his way in the win and Pugliese made six saves, allowing just the single goal. For the Midwest, Cooper Black (Maryland) stopped 24 of 26 shots and Henry Welsch (Aberdeen) made 14 saves on 15 shots. Boxscore

Central 5 vs. South 4 – Daniel Chladek (Bismarck) scored two goals to lead the Central Division squad to a 6-4 win over South in the final game of the NAHL Top Prospects Tournament. The Central finished the event with a 2-0 record. The game was deadlocked at 2-2 through one period as Chladek and Bram Scheerer (MN Wilderness) scored in the 1st period for the Central, while Will Stromp (Lone Star) and Gleb Murtazin (Amarillo) answered for the South. The teams also traded goals in the 2nd period to make it 3-3 as TJ Irey (Bismarck) put Central ahead once again, but the fifth goal of the Tournament from Matt Allen (Amarillo) tied the game again after two periods. Chladek and Jed Pietila scored early in the 3rd period to put Central ahead 5-3, but the South closed to within a goal late from CJ Walker (Lone Star) but could not complete the comeback. Each Central goalie, Landon Pavlisin (Kenai River) and Jake Sibell (Aberdeen), made 15 saves on 17 shots. Cayden Bailey (Lone Star) made 10 saves in 12 shots, while Richie Parent (Shreveport) made 9 saves on 12 shots. Boxscore