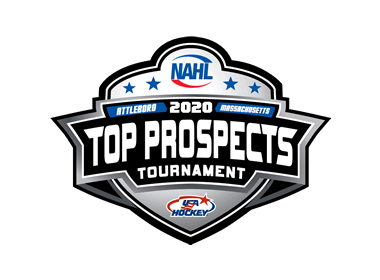 The North American Hockey League (NAHL) has announced the schedule, coaches, and number of players that will represent each team at the 2020 NAHL Top Prospects Tournament, which will be held from February 17-18, 2020 at the New England Sports Village in Attleboro, Massachusetts.
For more information on the 2020 NAHL Top Prospects Tournament, please visit: http://nahl.com/tpt/
2020 NAHL Top Prospects Tournament Schedule (all times eastern)
Monday, February 17th
12:00pm: South vs. NAHL Selects Red
2:30pm: Midwest vs. East
5:00pm: Central vs. NAHL Selects Blue
Tuesday, February 18th
10:00am: NAHL Selects Red vs. Midwest
12:30pm: East vs. NAHL Selects Blue
3:00pm: South vs. Central
The number of players each NAHL team is sending to the tournament, in which four teams from the four NAHL divisions: Central, East, Midwest and South and two NAHL Selects teams, will each play in two game games, was based on each team’s winning percentage within their group as of January 21, 2020. Only those NAHL players without an NCAA commitment are eligible to participate in the 2020 NAHL Top Prospects Tournament, with the exception of those who will be playing on the NAHL Selects teams. Each team is comprised of 18 players (10 forwards, 6 defensemen, 2 goalies). Rosters for the six teams are expected to be announced on January 30th.
For the Central Division roster, the Aberdeen Wings and Bismarck Bobcats will each send four players, the Austin Bruins and Minot Minotauros will each send three, and the Minnesota Wilderness and St. Cloud Blizzard will each send two. The head coach of the Central team will be Scott Langer from the Aberdeen Wings and the assistant coach will be Layne Sedevie from the Bismarck Bobcats.
For the East Division roster, the New Jersey Titans and Johnstown Tomahawks will each send four players, the Wilkes-Barre/Scranton Knights will send three, the Maryland Black Bears, Maine Nordiques, and Northeast Generals will each send two, and the Jamestown Rebels will send one. The head coach of the East team will be Craig Doremus from the New Jersey Titans and the assistant coach will be Mike Letizia from the Johnstown Tomahawks.
In the Midwest Division, the Fairbanks Ice Dogs and Chippewa Steel will each send four players, the Kenai River Brown Bears and Janesville Jets will each send three, and the Minnesota Magicians and Springfield Jr. Blues will each send two. The head coach of the Midwest team will Trevor Stewart from the Fairbanks Ice Dogs and the assistant coach will be Carter Foguth of the Chippewa Steel.
In the South Division, the Lone Star Brahmas and Amarillo Bulls will each send four players, the Topeka Pilots will send three, the Shreveport Mudbugs, Corpus Christi IceRays, and New Mexico Ice Wolves will each send two, and the Odessa Jackalopes will send one. The head coach of the South Division team will be Dan Wildfong of the Lone Star Brahmas and the assistant coach will be Rocky Russo from the Amarillo Bulls.
The head coach for the NAHL Selects Red team will be Simon Watson of the Topeka Pilots and the assistant coach will be Kevin Murdock of the Kenai River Brown Bears. The head coach for the NAHL Selects Blue team will be Jason Campbell of the Shreveport Mudbugs and the assistant coach will be Steve Howard of the Austin Bruins
The NAHL Top Prospects Tournament is one of the most highly-scouted events in junior hockey.  Last season, over 220 scouts attended the event, which featured almost every NHL team and NCAA Division I school. It continues to be an important part of the NAHL event model, which includes the NAHL Showcase in September and the NAHL Robertson Cup National Championship in May.
One of the things the NAHL does better than any other junior league is seeing their players earn an NCAA opportunity while playing and being showcased in the NAHL. To date, 169 players have already made NCAA commitments during the 2019-20 season. The NAHL Top Prospects Tournament plays a big role in that success, with over half of the players who played in last year’s Top Prospects Tournament, earning an NCAA Division I opportunity following their participation in the event. The event continues to provide the hundreds of NHL and NCAA scouts in attendance with a look at the best uncommitted players the NAHL has to offer, as well as, some potential NHL Draft picks.