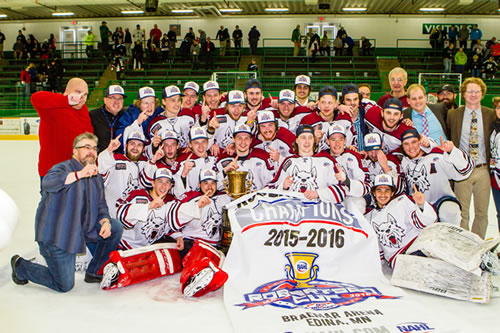 The North American Hockey League (NAHL) has announced that the 2017 Robertson Cup National Championship will be played at the Essentia Health Duluth Heritage Center in Duluth, Minnesota, from May 11-14, 2017.

“With its rich history and state-of-the-art facilities, we feel that the Essentia Health Duluth Heritage Center in Duluth is the perfect venue to crown our National Champion in 2017,” said NAHL Commissioner and President Mark Frankenfeld. “The feedback we received from the hundreds of NHL and NCAA scouts who attended last year’s Robertson Cup in Minnesota was very positive, so we felt a priority and need to keep that momentum and standard going. In addition to the NAHL Showcase and NAHL Top Prospects Tournament, it is yet another incredible event to highlight our most important asset, the players. With a National Championship on the line, we expect the competition among our four divisional playoff champions to be at a very high and entertaining level.”

One of the things the NAHL does better than any other junior league is seeing their players earn an NCAA opportunity while playing and being showcased in the NAHL. To date, over 185 players have already made NCAA Division I commitments during the 2016-17 season. The NAHL Robertson Cup Championship plays a big role in that success, with dozens of players from last year’s Championship earning an NCAA Division I opportunity following their participation in the event.

“We are extremely excited to be hosting the Robertson Cup,” stated Jerry DeMeo, President/CEO of the Essentia Duluth Heritage Center. “Duluth has a very rich and storied hockey tradition and to have the best teams in one of the top junior leagues in the world decide their National Championship in our arena, adds to our growing list of notable events at our venue.”

Built in 2008, the Essentia Health Duluth Heritage Center serves as the home of Duluth’s High School Hockey, the Duluth Amateur Hockey Association and the Dave Goldberg family branch of the Boys and Girls Club of the Northland. The center is a tribute to the rich hockey tradition in the area with numerous displays of Duluth’s hockey history. The facility has two ice rinks (Sill and Seitz Arenas). The Robertson Cup Championship will be held in Sill Arena, which accommodates up to 1,600 spectators.

The event will be held in cooperation with the 2017 NAHL Future Prospects Combine. Entering its fourth year in 2017, the Combine will accept applications from all players with birth years from 2001-04. The players will be introduced to and provided with a weekend that involves the ‘NAHL Experience,’ which will consist of competitive hockey, education of the future levels of hockey, academic preparation for NCAA hockey and exposure to professional, college, and junior scouts.