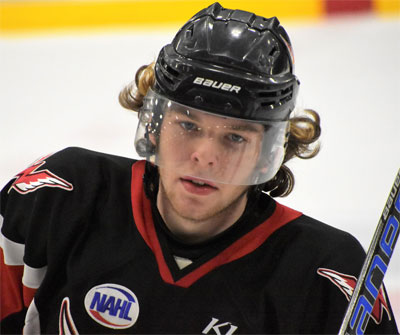 Jon Bendorf had four points, including a hat-trick, to lead the Aberdeen Wings to a 6-0 win in Game 1 of their Central Division Semi-Final series against Minot.

Central Division Semi-Finals, Game 1: Minot 0 @ Aberdeen 6 (Aberdeen leads series, 1-0) – The Central Division regular season champs flexed their muscles on Friday night in a convincing 6-0 shutout win over Minot as forward Jon Bendorf recorded a hat-trick and had an assist to give the Wings a 1-0 series lead. After a scoreless 1st period, the Wings put the pedal to the metal in the 2nd period as they recorded all six goals in the middle frame in a 16-minute span, which included three from Bendorf and others from Nathan Burke, Adam Pitters, and Joey Molenaar. Wings goalie Matt Vernon did the rest, making 25 saves in the shutout. Minot goalie Samu Lonkila took the loss with 16 saves in two periods. Reod Waszczenko stopped all 8 shots in the 3rd period.
The two teams will meet again tonight at the Odde for game 2 of the best of 5 series.  General admission and reserved tickets will be available at the door starting at 5:30.  The newest Aberdeen National Champion, Avery Dean will be dropping the puck and we will honor the NSU Men’s Basketball Team 1st Intermission!  Bring your skates and Skate with the Wings after the game!  The puck drops at 7:15!  Get to the Odde early and help send the boys to game 3 with a chance to sweep!