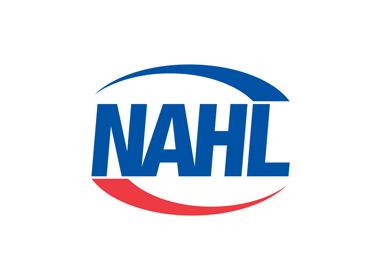 The North American Hockey League (NAHL) has announced the release of the 2017-18 regular season schedule.
Celebrating its 42nd season in 2017-18, the NAHL is the oldest and largest junior hockey league of its kind in the United States and one of only two USA Hockey-certified leagues that operate under the non pay-to-play model.  The NAHL is also one of the best at advancing players to NCAA and professional hockey.
During the 2016-17 season, the NAHL set a new single-season record with more more than 270+ NCAA commitments, 75% of which were NCAA Division I commitments. It marks the fifth straight season that the NAHL has recorded a record number of NCAA commitments.
There have been more than 1,100 college commitments from the NAHL in the past five seasons. In addition, 25% of all freshmen playing NCAA Division I hockey this past season were alumni of the NAHL. Three current NAHL players were also selected in the 2017 NHL Entry Draft.
Click here for the 2017-18 NAHL schedule
“The release of the schedule is an exciting day for us because it is the beginning and signaling of a new season where we continue our mission as the League of Opportunity. We want to keep all of the success, momentum and stability going in the right direction in 2017-18, and the schedule provides everyone with that roadmap into the future,” stated NAHL Commissioner and President Mark Frankenfeld. “Our owners worked together diligently and collectively to make the schedule happen in a timely manner and our continued success is the direct result of their leadership and commitment, along with the talented players, committed coaches and wonderful relationships with the NCAA and NHL,” Frankenfeld added.
Each of the 23 teams in the league’s four divisions (Central, East, Midwest and South) will play 60 regular season games. The regular season will commence on September 13, 2017 and end on April 7, 2018.
The 15th annual 2017 NAHL Showcase Tournament will be held from September 20-23, 2017 at the Schwan Super Rink in Blaine, Minnesota.  All 23 NAHL teams will play four regular-season games at the Showcase, which is one of hockey’s most prominent and popular events of the entire season. For scouting purposes, the event is a yearly gathering for every NCAA program and NHL team as they get their first look at some of the best and brightest hockey talent North America has to offer. A showcase schedule will be announced on a future date.
The 2018 NAHL Top Prospects Tournament will be held from February 26-27, 2018 at the USA Hockey Arena in Plymouth, Michigan. A schedule and format will be announced on a future date.
The 2018 Robertson Cup Championship, which crowns the NAHL’s playoff champion and USA Hockey’s Tier II Junior National Champion, will be held in May of 2018 at a neutral site and will feature the four NAHL Divisional Playoff Champions. A location for the and specific date for the event has yet to be determined.
2017-18 NAHL Divisional Alignment:
Central Division (6): Aberdeen Wings, Austin Bruins, Bismarck Bobcats, Brookings Blizzard, Minnesota Wilderness, Minot Minotauros.
East Division (5): Aston Rebels, Johnstown Tomahawks, New Jersey Titans, Northeast Generals, Wilkes-Barre/Scranton Knights.
Midwest Division (6): Coulee Region Chill, Fairbanks Ice Dogs, Janesville Jets, Kenai River Brown Bears, Minnesota Magicians, Springfield Jr. Blues
South Division (6): Amarillo Bulls, Corpus Christi IceRays, Lone Star Brahmas, Odessa Jackalopes, Shreveport Mudbugs, Topeka RoadRunners.