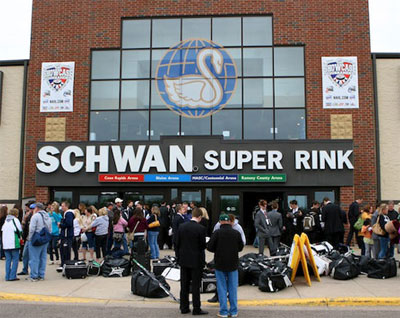 Save the Date: The 15th annual NAHL Showcase will take place from September 20-23, 2017, at the Schwan Super Rink in Blaine, MN.

The North American Hockey League (NAHL) has announced the dates for the 15th annual NAHL Showcase, which will take place from September 20-23, 2017, at the Schwan Super Rink in Blaine, Minnesota.
All 24 NAHL teams will play four regular-season games at the Showcase, which is one of hockey’s most prominent and popular events of the entire season and has become the ‘Greatest Show on Ice.’
One of the things the NAHL does better than any other junior league is seeing their players earn an NCAA opportunity while playing and being showcased in the NAHL. To date, 200 players have already made NCAA commitments during the 2016-17 season, with almost 90% of those being NCAA Division I commitments.
The NAHL Showcase plays a big role in that success, with dozens of players each season earning an NCAA Division I opportunity during and following their participation in the event.
The NAHL Showcase attracts over 9,000 people in overall attendance, including more than 350 professional, college and junior scouts.  For scouting purposes, the NAHL Showcase is the premier event of its kind and is a yearly gathering for every NCAA program and NHL team as they get their first look at some of the best and brightest hockey talent North America has to offer. For more information on the NAHL Showcase including schedule, ticket prices, hotels, rental cars and arena information, visit nahl.com/showcase
A 2017 NAHL Showcase schedule will be released later during the Summer of 2017. All 48 NAHL Showcase games will be broadcast live and in HD through HockeyTV, the official broadcast provider of the NAHL.
The Schwan Super Rink is the largest ice arena of its kind in the world. The state-of-the-art facility, a $21 million project totaling over 300,000 square feet, features eight sheets of ice under one roof. With all its varied amenities and services, the Schwan Super Rink is absolutely unique in the world of ice sport facilities.
It will be the first event of the season for the North American Prospects Hockey League (NAPHL), which will also be played in conjunction with the Showcase. Now entering its ninth season, the NAPHL is made up of USA Hockey-sanctioned Tier I teams that compete in the 18U, 16U and 15U levels. NAPHL teams will compete at the NAHL Showcase from September 21-24.
The event will also feature 16 additional teams from the Tier I, High Performance Hockey League (HPHL). This marks the third straight Showcase that the NAHL has partnered with the High Performance Hockey League. The partnership between the NAHL and the HPHL further enhances the Showcase since all see numerous players commit to NCAA programs each season.
Share on Facebook