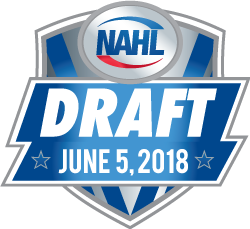 When is the NAHL Entry Draft?
The 2018 NAHL Entry Draft will take place on Tuesday, June 5th at 1pm (central). The draft will be live on nahldraft.com and will be broadcast live on hockeytv.com.

Do I have to register for the draft?
No. If you are eligible for the draft, each team will draft individual players largely based upon scouting throughout the season and/or a team’s needs.

How many players can each team select in the NAHL Entry Draft?
The number of players each team is able to draft varies on that team’s current roster (protected list) minus the number 30. Each team’s roster is comprised of veteran players and signed tenders only. For example, if a team has 15 veterans rostered and 8 tenders (23 total), that team is allowed seven (7) draft picks.

What if a prospective player is not drafted, but is still interested in playing the NAHL?
Players not drafted but who still want to play in the NAHL are encouraged to attend individual team’s open tryout camps.

All NAHL rosters must be reduced to 25 players by September 1.